ADVICE TO
THE PLAYERS

The Concerts Series is sponsored & hosted by Advice To The Players, at the Arts Center at 12 Main in Center Sandwich. The Concert Series hosts weekly concerts in the summer, and intermittent concerts through the fall, winter, and spring. Admission is choose your own ticket price. Donations support the arts, the artists, and the venue.

Elizabeth Field, violin, enjoys an active career as a chamber musician and soloist on period and modern violin. She is the concertmaster for The Bethlehem Bach Orchestra and has served as a guest concertmaster for numerous ensembles around the country, including the Washington Bach Consort, National Philharmonic, Opera Lafayette, and
the Spire Ensemble in Kansas City. Field performs regularly with her chamber ensembles, The Vivaldi Project and ArcoVoce and is a frequent guest artist with the Mallarme Chamber Ensemble and Magnolia Baroque. Elizabeth is currently on the faculty at George Washington University and along with Vivaldi Project Co-Director Stephanie Vial, runs the annual Institute for Early Music on Modern Instruments (EMMI). The Vivaldi Project’s critically acclaimed recording of seven unknown 18th-century string trios, Discovering the Classical String Trio, has been heralded as well as groundbreaking: “your library needs a copy of this in its collection” (CD Hotlist). Her collaborative DVD with fortepianist Malcolm Bilson titled: Performing the Score, was lauded by Emanuel Ax as “truly inspiring”.
Elizabeth has enjoyed a lifelong relationship with Center Sandwich, spending summers in the cabin on Intervale Pond built in 1937 by her grandfather James Ormsbee Murray. Elizabeth’s aunt, Helen Murray, enjoyed her retirement in her lovely home on the road to North Sandwich.

Violist Uri Wassertzug has performed in locations including Alaska, California, and
Utah in the U.S. as well as the UK, Italy, Japan, and New Zealand. He is a member
of the Kennedy Center Opera House/ Washington National Opera Orchestra as
well as Idaho’s Sun Valley Summer Symphony. Mr. Wassertzug is a member of the National Chamber Ensemble and appears frequently on the Kennedy Center’s Millennium Concerts series. He has also performed with the San Francisco Opera
and Symphony, the National Symphony, the Sacramento Symphony, the Cabrillo Festival, and the California Symphony among many other orchestras. Chamber
music appearances and affiliations have included the New Zealand Festival of Chamber Music, Mozart in Monterey, the Foulger International Music Festival,
Beau Soir Ensemble, Empyrean Ensemble, Sun Quartet, and Novella Chamber
Players. Mr. Wassertzug is on the faculty of George Washington University. His own studies were at the University of Maryland, as a Fellow at the Aspen Music Festival, and the San Francisco Conservatory of Music, where he was awarded the Germaine Prevost Scholarship. Some of his teachers included the members of the Guarneri Quartet, Isadore Tinkleman, and Robert Becker. Away from the viola, Uri enjoys
​making pizza and has been roasting his own coffee for about 15 years.

At Home with Lindsay and Tamar on July 23rd on Facebook

Singer/songwriter Andriana Gnap has appeared as a vocalist, actress, violinist, and dancer at venues such as the Capital Center for the Arts in Concord, NH, the Lunaria Jazz Club in Los Angeles, the Lyric West Stage Company of Boston, the Waterloo Bridge Theater in New York, and New England’s prestigious Williamstown Theatre Festival, with Kate Burton, Broadway director Darko Tresnjak, and director/actor Roger Rees of the Royal Shakespeare Company and television show Cheers.
Originally from upstate New York, Andriana grew up with a strong connection to her Ukrainian heritage. She began performing Ukrainian folk music at age four, both as a soloist, and with her mother and aunt as the Family Trio Heavenstar. The trio has appeared in productions such as the Ukrainian Festival of Toronto, Canada, as well as the Cold River Radio Show here in N.H. Andriana’s original songs in English and Ukrainian continue to be showcased on international radio and television programs. Her compelling arrangements embrace listeners with “heartfelt vocals and beautifully blended harmonies” (Yevshan Music, Canada). Andriana’s recent Ukrainian album, Songs From Home, is dedicated to the memory of her grandfather, who inspired the project and wrote several of the emotionally driven ballads. From Ukrainian folk songs to American jazz standards, Andriana is looking forward to sharing a variety of music with you. For a preview of her work, please visit www.Andriana.org. You can also find her music on streaming platforms under the artist name Andriana.
David Lockwood- August 6th on Facebook Premiere

David Lockwood has played for many years in the greater New England area with the and trios, sharing the stage with Bonnie Raitt, Joe Lovano, and Mavis Staples among others. As a solo singer/pianist he covers a wide range of material from jazz standards to classic pop tunes and one hit wonders to his own songs. In favorable weather, he travels with his baby grand on a trailer, performing outdoors as Little Davey & The Rolling 88’s and has been featured on WMUR’s New Hampshire Chronicle.

​David has recorded three albums of solo piano music, an album of original instrumental compositions with Raccoon Beach, and in 2009 Lucky Me, an album of twelve original “grown-up” songs which received airplay around the country. Hailed by Randy Newman as “a really good record,” Lucky Me finished the year on the Roots Music Report Top Folk albums of 2011 at # 45. Modern Love, his most recent album of original songs inspired by essays in the New York Times column of the same name was successfully funded through Kickstarter and has been enthusiastically supported by Dan Jones, the column’s editor: “I find these songs as entertaining and soulful as the essays themselves.” 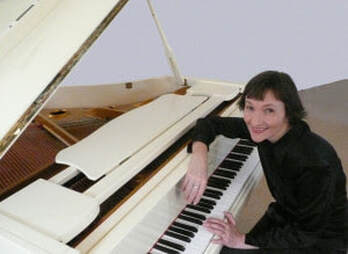 Natalia Shevchuk graduated in 1994 from Kyiv State Conservatory (Ukraine) with a master's degree in piano playing, accompanying and teaching. She was among the winners of Rachmaninoff's piano competition in Kyiv in 1993. As a piano player she grew under the guidance of Nina Kharchenko (her first teacher), Natalia Vitte, Igor Ryabov, and Ada Krivosheina. She also took piano ensemble and accompaniment courses under the tutelage of Iya Tsarevich. Being a student yet, she worked as a piano accompanist for the National Ukrainian Academic Drama Theater.

After graduation, she worked as a pianist and composer in the Kyiv Theater of Historical Portrait under the direction of People's Artist of Ukraine Igor Shvedov (1924-2001). This famous Ukrainian actor and writer combined his performances with music and stories, each dedicated to a certain famous figure.

While living in Conway, Natalia worked with the Pot Luck Singers teaching Ukrainian songs. She also helped out accompanying the Mount Washington Valley Choral Society occasionally. Visible cognitive engagement, phenomenal technique, and unlimited communicative skills inform her playing, and possession of these three attributes provides audiences with heightened aesthetic grandeur. Natalia Shevchuk 's performances are simply extraordinary. Shevchuk plans on an all-Beethoven program, in celebration of Beethoven's 250th anniversary.  Odell & Shevchuk are coordinating so that they will be playing different pieces.  *This program is currently tentative due to current travel restrictions in light of COVID19--if the date needs to change, we will let
you know. You can view the performance on Facebook at 7:30pm Friday 6/26; we will have a link to get you there from our website homepage
and concerts page. We will leave the performance up for one week,
​so if you're not available Friday night you can still join us. 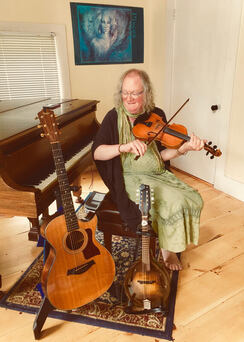 Shana Aisenberg July 9th on Facebook and Live (by RSVP only) on July 8th
​
Shana Aisenberg is an acoustic multi-instrumentalist, composing, playing, recording
and teaching diverse styles from traditional Appalachian, Celtic and New England contradance music to eastern European Klezmer, Balkan, Nordic, bottleneck blues
and jazz. Shana first achieved national recognition for her intricate and sensitive fingerstyle guitar playing, recording solo albums for various labels. She has been particularly involved in American roots styles for 35 years and plays a wide array of stringed instruments including fiddle, mandolin, bouzouki, acoustic, resonator and
lap steel guitars, 5 string banjo, fretted dulcimer, ukulele, and frame drums.
Shana has composed music for film documentaries, and has produced, engineered
and played on numerous recordings by other artists. She has written and contributed arrangements to guitar and mandolin books for Mel Bay Publications and has
recently completed writing a ukulele instruction series, due to be published by
​Alfred Publications in August 2013.
Shana is a gifted music teacher with over 35 years experience and has taught at
various workshops and festivals nationwide. She has taught hundreds of satisfied students and will work with dedicated players of any level, either individually or in groups. In 1981, Shana was a triple winner at the prestigious Walnut Valley National Flatpicking Championships, Winfield, KS, placing in fingerstyle guitar, mandolin and fretted dulcimer categories. 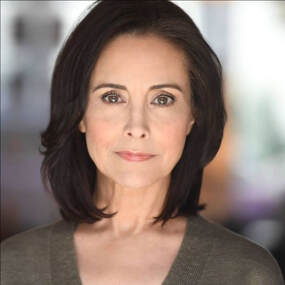 Love Songs With Lauri Landry, accompanied by Kevin Chamberlain-
July 2nd at 7:30 on Facebook
Lauri's performance will be recorded on July 1st at the Arts Center without an audience.  This concert will then be streamed on Facebook July 2 at 7:30pm and will be available for one week.

Lauri Landry's credits include: BROADWAY Zoya's Apartment, The Scarlet Pimpernel. NATIONAL TOURS, REGIONAL THEATERS. CONCERTS The Music of Andrew Lloyd Webber In Concert national and international tours, The Night of 1000 Voices at Royal Albert Hall in London Stephen Sondheim Birthday Celebration at The Brooklyn Academy of Music, An Evening with Lyricist Tim Rice at Holders House in Barbados, several concerts with the Philadelphia Pops at both the Mann Center and The Academy of Music Concert Hall. TELEVISION-Daytime Another World, Nighttime, many guest-starring roles starting with Simon & Simon in the 1980s, currently a member of the cast of the Amazon Prime show After Forever. The show won the 2019 Emmy for "Best Drama New Media Category" in its premiere season.

She will be accompanied by Kevin Chamberlain for an evening of musical theatre love songs. 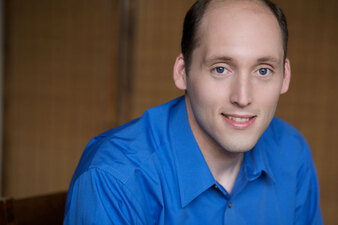 New Hampshire pianist Matthew Odell began studying piano
at the age of 10 and has since won acclaim for performances of a wide range of repertoire as a solo recitalist, soloist with orchestra, and chamber musician. He has been hailed as “excellent” by the New York Times and “brilliant...playing with total commitment and real abandon” by Gramophone. Past concerts include the final installment of concerts of the complete piano music of Elliott Carter and Pierre Boulez, a tribute to Pierre Bernac and Francis Poulenc at Lincoln Center, a concert at Carnegie Hall, and a European tour of concerts, lectures, and masterclasses in England, France, and Spain.

In addition to performances in Weill Recital Hall and Zankel Hall at
Carnegie Hall, Alice Tully Hall, and the 92nd Street Y in New York,
Mr. Odell has appeared at the Kennedy Center in Washington, D.C., and St. Martin-in-the-Fields in London.
Odell will be performing a program primarily of Beethoven
recorded from the Arts Center at 12 Main Street on 6/24.  You can view the performance on Facebook at 7:30pm Thursday 6/25; we
will have a link to get you there from our website homepage and concerts page. We will leave the performance up for one week,
​so if you're not available Thursday night you can still join us!